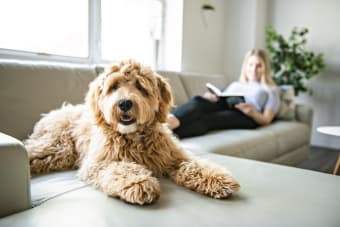 Ticks commonly spread Babesiosis or Babesia infection to dogs and other mammals across the United States. Our Memphis vets explain the symptoms and treatments for Babesiosis and how you can help to prevent your dog from contracting this and similar diseases.

What is Babesiosis in Dogs?

Babesiosis is a predominantly tick-borne disease caused by a family of Babesia organisms that invade and attack the red blood cells in mammals, (including humans and dogs). In the US the most common Babesia organisms found in dogs include Babesia canis and Babesia gibsoni.

How is Babesiosis in Dogs Spread?

Babesia organisms are typically spread to dogs through the bite of an infected tick. Additionally, Infected dogs with open mouth sores can infect other dogs through a bite, and pregnant females who are infected can transmit babesiosis to their unborn litter.

Babesia gibsoni infection in Pit Bull Terriers is most often due to maternal transmission or dog to dog bites.

More rarely, tainted blood that is accidentally transmitted can lead to Babesia infection in dogs.

What are the Symptoms of Babesiosis in Dogs?

Symptoms don't always appear in dogs with chronic Babesia, though even asymptomatic dogs could spread the disease to other pets or people.

The symptoms that your dog displays will depend on the precise type of Babesia that has infected them, however, the most common symptoms of acute Babesia include:

How is Babesiosis in Dogs Diagnosed?

Your Vet will check for symptoms including swollen lymph nodes, pale mucous membranes, and an enlarged spleen. If babesiosis is suspected your veterinarian may recommend blood and/or urine tests to look for signs of anemia, low platelet count, low albumin, or the presence of bilirubinuria.

In some cases, Babesia organisms can be spotted doing a simple blood smear, though other diagnostic tests including fluorescent antibody staining, indirect, immunofluorescence (IFAT), ELISA tests, and PCR (polymerase chain reaction) testing may be required to confirm a diagnosis.

Babesia DNA testing (PCR testing) is often recommended to help your veterinarian to pinpoint which type of Babesia organism has infected your dog. This is especially valuable information as infection by different species requires different medication for the most effective treatment.

What is the Treatment for Babesiosis in Dogs?

Common treatments include the following trifecta:

Depending on the strain of Babesia being treated, dipropionate injections may be required in addition to the above treatments.

A combination of atovaquone (a quinone antimicrobial medication) and azithromycin (antibiotic) may be prescribed as a treatment for dogs infected with Babesia gibsoni.

What is the Prognosis for Dogs with Babesiosis?

Most cases of Babesiosis will not be diagnosed until the disease is fairly progressed.

How well the patient recovers from the condition will depend upon which of their systems are affected (and what side-effects your dog is experiencing due to the infection), so the prognosis is generally guarded.

Dogs that survive an initial Babesia infection may remain infected but asymptomatic for a fairly long period of time, then suffer a relapse. Dogs with a chronic (symptom-free or very mild symptoms) infection could still spread the disease to other animals.

How can I Prevent Babesiosis infection in my Dogs?

Taking preventative measures is key, both for your canine's health and to avoid treatments. To protect your canine family member(s) against babesiosis and other tick-borne diseases, keeping your dog on year-round tick prevention medication can greatly reduce the odds of infection.

Making Daily checks for Ticks is important.  An infected tick generally has to be feeding for a minimum of 48 hours in order to pass on a Babesia infection, so proper removal of the parasite shortly after it came into contact with your pet goes a long way towards keeping them healthy.

Note: The advice provided in this post is intended for informational purposes and does not constitute medical advice regarding pets. For an accurate diagnosis of your pet's condition, please make an appointment with your vet.

Do you think that your dog may be suffering from a Babesiosis or a similar infection? Have you spotted a parasite on your Dog and are unsure how to proceed? Contact us at Memphis Veterinary Specialists and Emergency now for a consultation. Our hospital is open 24/7, and will always work in tandem with your primary care veterinarian as needed to best care for your pet.